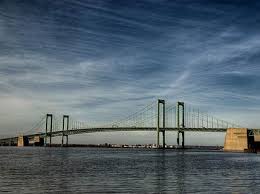 I have seriously fallen in love with bridges. I have always loved them, but now I have arrived at the point where I want to take a picture of each one I see. I have refrained. It is hard.

I grew up in Delaware, the second smallest state in the nation. They have some really beautiful and giant bridges. The Delaware Memorial Bridge comes to mind. It is a double span suspension bridge that crosses the Delaware River. When I was young I knew crossing that bridge meant we were on our way to the “Jersey Shore”.

Crossing the St George bridge in southern Delaware, was the first time I saw a sign, offering a phone number to call if you were afraid to drive your car across the bridge. Someone else did the driving for you.  I suppose the person making that phone call would be cowering in the back seat as they rode the length of the span.

Driving across the Golden Gate, late July-Take note the fog.

Then I moved to California. The first time I saw the Golden Gate and the Oakland Bay bridge, it was love at first site. They are so majestic and grand.It is still a thrill driving or bicycling across the Golden Gate Bridge. It is not unusual for that bridge to be covered with fog. 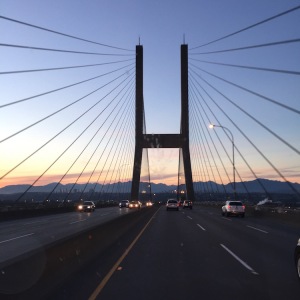 Now I am in the northwest and have once again renewed my love for bridges. As we drove across the Columbia River, on I-5 going north, I kept asking Cat to take photos. I was so excited.  We arrived in Vancouver and crossed another beautiful bridge just as it was getting dark. 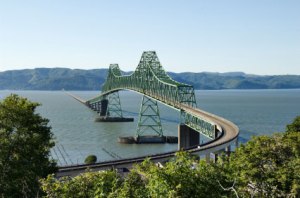 Progressing down the coast I have been crossing one beautiful bridge after another. The bridges in Oregon begin with the Astoria–Megler Bridge and continue down the coast to California. These bridges were designed and built by Conde B. McCullough. McCullough combined Romanesque arches, Egyptian obelisks, gothic piers, and Art Deco designs with the state-of-the-art and cutting-edge technologies of the day. In 2005, 11 of these coastal bridges were placed on the National Register of Historic Places. They are beautiful, functional bridges and so much fun to cross. 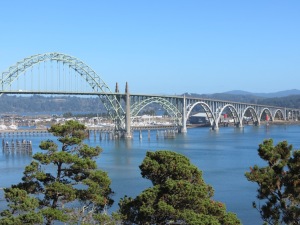 Remember, as you see these bridges, Cat and her pups have crossed each one by bicycle. I drove the Astoria-Megler Bridge three times so I could snap a few quick photos of her. It helped that they were doing construction on the bridge, so everyone either had to stop or slow down. It was not a hardship to cross it that many times. I absolutely enjoyed each drive. 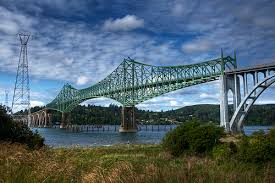 Today, as I crossed the McCullough Memorial Bridge (Coos Bay)–1936, I knew I had to tell you of these beautiful structures. For this bridge loving woman I have been in my glory riding down the 101, crossing one beautiful bridge after another. 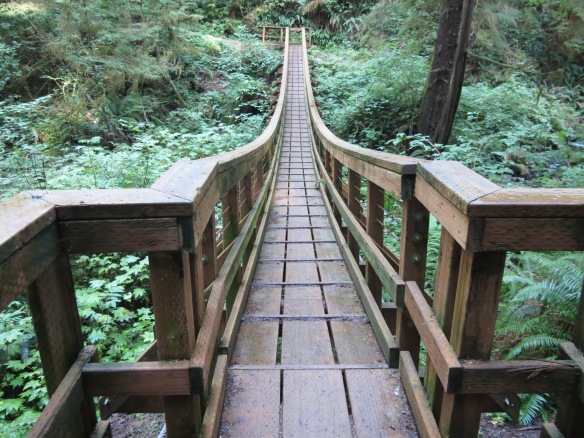 I love all bridges, This is a foot bridge on a hike I did at Cape Lookout.

7 thoughts on “Bridges-Love Those Bridges”