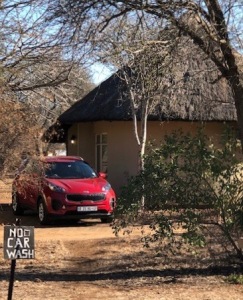 This is the first time I have ever had to get behind the wheel on the right side of the car and drive on the left side of the street. Whoa. I am glad I had time to practice in Kruger National Park before I began to drive on the busier roads outside the park. My driving mantra is stay left, remember to always stay left, even when I turn right.🙃

When driving in the cities, no matter the size, it is crazy. When I am driving I look at Phyllis, grab the wheel with both hands and say “I’m going in”. People walk anywhere they want, between cars, along the side of the road. They carry food on their heads and babies on their backs (tied with a blanket) and plastic bags loaded with stuff in every hand available. They chat and laugh and are easy with all the congestion going on around them.

Cars move all over the road in the city centers. They sometimes stop in the middle of the road and the other cars drive around them so normally. I need to be a bit aggressive to drive in the city centers. No one seems to mind when I drive on the wrong side of the street. It is the norm to swerve around people, the occasional goat or cow. I don’t relax until we are out the other side. 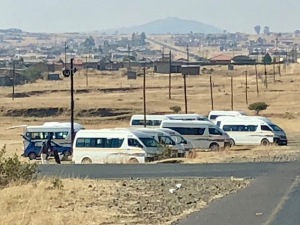 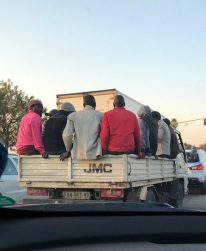 Taxis or buses are everywhere. They stop at pull offs, the side of the road or anywhere else they see fit. If they are too full, never fear, a pickup truck may stop and give you a lift. Often the back of the pickup will be filled with people of all sizes.

It is not unusual to encounter, cows, goats, pigs and sheep along almost any road we have traveled on. The cars coming towards us flash their headlights on and off and then we know there is something in the road up ahead. 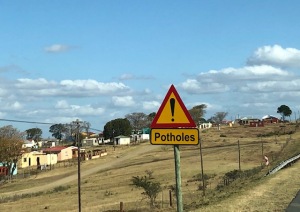 All small towns have speed bumps. Most are marked but there are the few that surprise us, a brief few seconds before we encounter them. There are single speed bumps, small ones and multiples of four. Along with the speed bumps are the pot holes, big pot holes, small pot holes-pot holes of every size. I have found that it is best to drive behind the taxi’s or small buses. The drivers are very familiar with the conditions of the road. If they slow down, I slow down. If they swerve to the other side of the road I anticipate that I will need to do the same. Some of these pot holes are serious and deep.

There have also been some unusual experiences on the road. As I was driving toward the Paul Kruger Gate on this small road, all of a sudden there were large rocks, small boulders and crushed glass all over the road. Thankfully there was a taxi in front of me and I followed him onto the dirt along the side of the road, turned down another dirt road and followed him into a gas station. It turns out that the locals were protesting the lack of water in their community. It was a bit scary and overwhelming. He suggested we turn around and head back. He would lead the way. So I did.

That wasn’t the end of the story. Once we got back out of that mess he stopped and wanted us to follow him on an alternative route. He wanted money for gas. We were both smart enough to say no. We went on out to the main road and found another entrance into the National Park. These kind of events lead me to exhaustion at the end of the day. 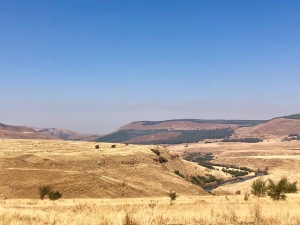 A beautiful view on the Road Less Taken

One day we were heading for Underberg, South Africa. About an hour after we left the main road, all the cars coming towards us were flashing their lights and waving their hands. We had no idea what they wanted. Soon we discovered that there was another protest. A community wanted to get paved or tar roads. There was a long line of cars and trucks waiting. People were walking around outside their vehicles trying to get cell reception. I finally asked someone what was going on. This is when we learned that the wait could be very long. With the directions of one man, I turned around and took an alternative route. This young man told us to turn at a certain intersection to get back to the road we needed to be on. The road that went straight looked appealing to me and Phyllis, so we stayed on that road. Soon we discovered why the local communities wanted tar roads. The paved road ended and we tackled quite a few miles on a dirt road that was sometime good and sometimes not so good. We made it and it was a spectacular if not long drive.

After tackling a wet and muddy road this morning, followed by more potholes I have successfully completed another day of travel. Driving will remain one of the major challenges of this trip. It is fun, tiring and exhausting. Tomorrow I imagine I will have another chance to grab the wheel look at Phyllis and say, “I’m going in”.

Never miss out. Click on the link below to receive notification of new posts on this blog.