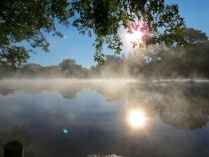 Morning on the Lake

I was not planning to post again this soon. Today I found out that friends of mine have lost their 19 year old son in a car accident. It immediately struck a deep chord within me. I do and do not know their feelings. This moment in their lives will be full of so many feelings. This I do know. I also know that no parent should have to lose their child. There is something not right in this and yet it happens. If you can think a little bit of Tim and Sandy today and in the weeks ahead. They may not know you but energetically all those loving thoughts will hold them up and support them. This I do know.

I want to tell you about my husband Jim. A major part of the reason I am on this journey is due to his and my struggles over the past years and I want you to know him, just a little. I met Jim dancing. We are folk dancers and when I first saw him on the dance floor I noticed his marvelous blue eyes right away. I also noticed he stood tall and straight and boy could he balance & swing. After dances on Friday nights a group of us would go to the City Deli for coffee and goodies. Jim always sat next to me and although we had conversations none of them were ever finished.

Fast forward a year. I was getting ready to join the Traveling Nurse Corp and was packing up my apartment to move. It had been hot and I had been walking the beach most evenings. One night with the help of his former girlfriend, Leslie, I phoned him and invited him to walk the beach with me. Within a half hour he was at my door and we went walking. I remember him riding the roller coaster even though he was afraid of them.

I moved out to Albuquerque as a traveling nurse. Within two weeks this man was at my door. We started a long distance relationship. It was so much fun to have someone to explore with. It was so much fun to discover who I was becoming through another person’s eyes. At the end of 3 months Jim wanted me to move back to San Diego and in with him. I did not feel ready. I went up to the mountains and meditated and thought. One day, I know it sounds totally weird, I heard a voice tell me that Jim and this relationship would be one of the most challenging and yet rewarding experiences of my life. I came off the mountain and called him and told him I was coming home at the end of the month.

February 4, 1991 I moved into some of the best moments of my life. Jim and I had a very unique and special relationship. We were connected in a way that I never thought would happen to me or anyone else. We fit so easily together. We both loved to travel and challenge ourselves. Even though we both knew there was a specialness to the relationship it was through others that it was acknowledged. Deana, our realtor and friend has said more than once she has never seen two people talk and communicate with such honesty and openness. I think we often did this because we were so concerned about hurting each other. There are many levels to a relationship and I really thrived with Jim. It is not saying we did not have moments when we argued but they were few a far between and neither of us would let that moment go without sorting it out.

Here are some of my remembered qualities of this wonderfully eclectic man.

WHAT ARE YOUR MEMORIES OF JIM? 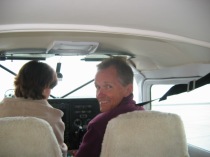 Ready to Fly with Baja AirVentures 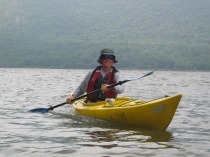 Kayaking on the Hudson River