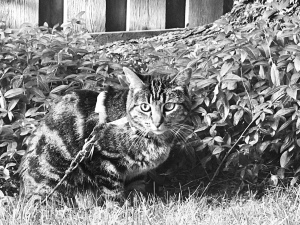 It has been quite some time since  I last posted. I have been on some adventures. Janet keeps thinking of new places to go. Most of the time she takes me but some times she leaves me with friends.

I did the stay with friends thing a while back. I had my safe place but I had to share my place with a dog, Poncho and two cats, Misty and Ophir. I remember the dog and Misty but Ophir was new to me. Here is what I have learned about dogs from Poncho. There could be a whole house full of cats, God forbid, but as long as the dog was the center of attention, he couldn’t care about the cats. He also likes to sneak the cat food when no one is looking.

Cats are a different story. The two cats mentioned above and I got along, by ignoring each other. Ophir likes to catch voles and mice. He would disappear for hours on end and then pretty much ignore me and Misty. Misty and I were on leashes when we were outside and we pretty much ignored each other too. By the end of my stay Misty was making overtures of friendship, though, I am not sure. 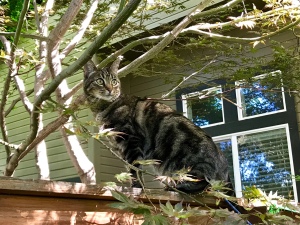 I liked to get up on the fence and walk the fence line. It was fun to be high and see the world. If I snuggled into the shadow of the tree no one walking by would see me. I liked that a lot. It is a big world for a small cat on top of a fence. I saw people walking dogs, these funny little birds with a feather bobbing on their head. They don’t fly very much, just run really fast on the ground.

After some time, Janet showed up and back into our little home on wheels I go. We drove into the mountains. Some nights we were alone and other nights we shared our area with other people. I like it better when I am alone because all those people kind of concern me. Janet says I am skittish. Maybe I am. It might help me keep my nine lives in tact.

We camped for what seemed a long time in a campground with many other campers that looked just like ours. Some were big, some were small and some didn’t look like my home at all. We camped with Linda and Steve. I was OK with that because they were my caretakers while Janet was gone and I knew them. Other people would come visit and leave. I finally decided that if I was going to get any outside time at all I was going to need to be brave and come outside while people were sitting there. I was good until any of them came up to talk to me. I would run inside.

Since then I have seen mountains, rivers, and forests. I like camping in the forests the best. It is often quieter there. than anywhere else. I also get to find my inner beast and pretend I am a wild animal living in the forest. But, wait a minute, I like my Wild at Heart cat food too much. I guess I will remain domesticated. I like having my creature comforts too much to be truly wild. A cat can dream.

Now we are in someplace called Canada. I am not sure why it is called that and really it doesn’t matter. Although I am in the forest it appears that there is a lot of water around this land. I really don’t like water, except to drink. Have you ever seen a dog jump and play in the water? They have so little self respect and why would anyone want to get wet like that?

I titled this post in French as Janet says that is one of the languages spoken here. Meow sounds the same in every language. 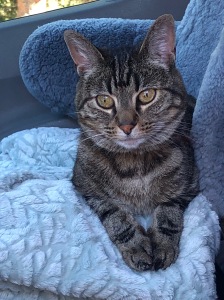 Every day Janet and I go out “touring”. Well she tours and I sleep in the passenger seat. I need my beauty sleep. Janet always makes sure that everything is cool and comfy for me when she leaves to go walking. It gets dark and cozy in my house. The fan is gong and I fall asleep. She is a good pet person. I am always glad when she returns, although I feign indifference.

I think that sometimes, Janet is lonely, so I am glad to be there for her. She and I are never alone when we are there for each other.

Well, time for another nap.